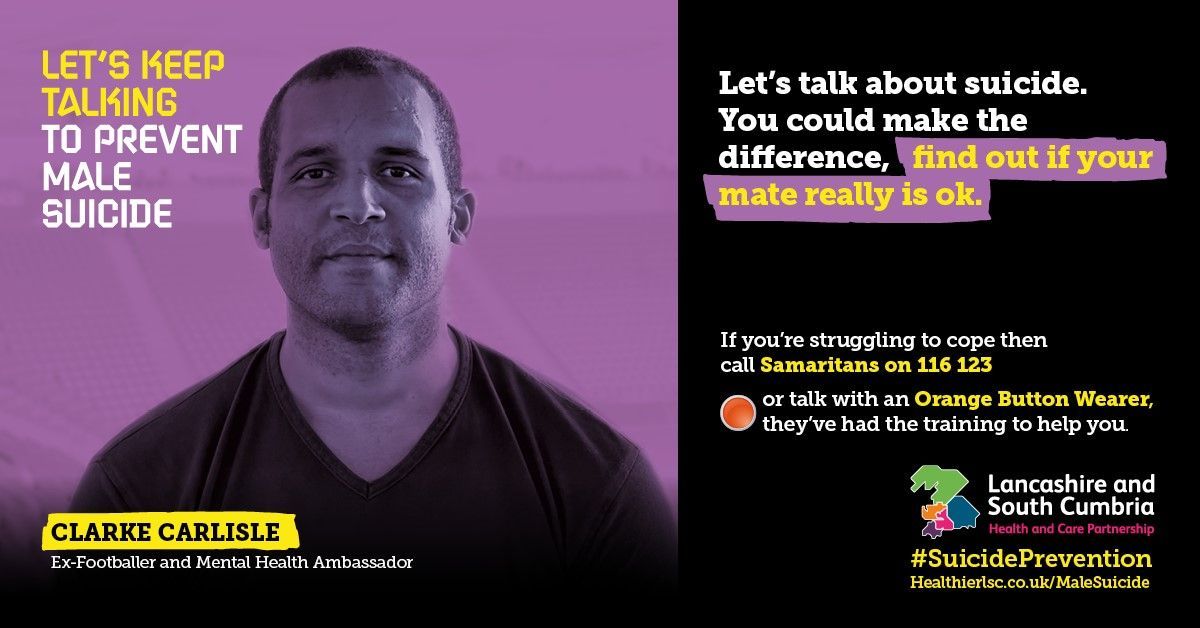 Former Premier League footballer Clarke Carlisle is making an emotional appeal for people to ‘keep talking’ in a bid to stop men from taking their own lives.

The 41-year-old is supporting the latest phase of Lancashire and South Cumbria Health and Care Partnership’s Let’s Keep Talking campaign which is being launched today – World Suicide Prevention Day (10 September 2021).

Suicide rates across the region are the third highest in England and men are three times more likely to take their life by suicide than women.

The former Blackpool, Burnley and Preston North End defender has spoken openly about his own battle with depression and previous suicide attempts.

“It’s no secret that I’ve struggled with my mental health for many years, so much so there have been times when I have been intent on taking my own life.Too many people still don’t understand depression is an illness and people can’t just ‘pull themselves together’. We need to end the stigma, we need people, especially young men, to open up about their mental health and talk about feelings of suicide. I feel blessed that I’m in a much better place now and I want people who are facing similar struggles to what I’ve experienced to know that there is a light at the end of the tunnel.”

Sixty-seven per cent of people who die by suicide are not known to mental health services – and it is the biggest killer of men under 49.

The past 18 months has been a very difficult time for a lot of people. It is more important than ever for people to reach out if they are struggling with their mental health.

“We’re extremely grateful to Clarke for getting behind our campaign. We know his personal experiences will resonate with so many other people, particularly young men. We know suicide isn’t the easiest subject to talk about, but if you’re worried about someone it’s OK to ask, ‘are you thinking about suicide?’ Listening is more powerful than people think and having these conversations could save a life.”

For more information and help and support visit our Male Suicide webpage.