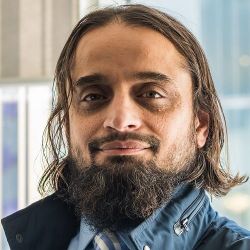 During the coronavirus pandemic, partners in Lancashire and South Cumbria worked together to provide housing and healthcare support to around 1,500 homeless people.

Colleagues from across housing, social care, health, other public sector and voluntary, community, social enterprise and faith sector organisations came together to safeguard rough sleepers and other vulnerable homeless people from COVID-19.

As the whole country prepared to go into lockdown and 2.2 million people were advised to shield from the coronavirus, the government issued guidance to councils to make arrangements for rough sleepers – known to be at a greater risk to the virus as they often have underlying health issues.

“Homelessness is not just about housing or bricks and mortar – it is about people and their health and social needs. By working together during this pandemic, we are now able to address the multiple needs of individuals, putting them at the centre, with services wrapped around them.

A key success of the COVID-19 response has been the speed at which we’ve come together to respond to the housing, health and social care needs of homeless people and rough sleepers. We are committed to ensuring we address all of the needs of our homeless population, not just the need for short-term accommodation.”

Across Lancashire and South Cumbria to date, more than 1,472 homeless people have been found temporary or emergency accommodation and more than 374 health assessments have taken place.

Daniel, age 23, from Blackburn with Darwen was given temporary accommodation and a range of health, wellbeing and practical support. He said:

“My Inspire worker found out I was sleeping rough in a tent, so she got me this offer [of a hotel]… Everything in my life has improved considerably since moving here… I don’t use drugs, my mental health’s improved a lot and overall, I feel like a better person.”

“We know that the number of people sleeping rough has been increasing in recent years, and people affected by homelessness die, on average, around 30 years earlier than the general population.

It is clear that a multi-disciplinary, multi-agency approach to address underlying risk factors to physical and mental health is vital to improving health outcomes. In a future after COVID-19, we must not lose the progress we’ve made and the lessons we’ve learned whilst responding to this virus.”

I'm 23 years old and I've been in this hotel for about two and a half months now.

Before I came here, I was sleeping in a tent up in Blackburn, near KFC at the hospital. I was there because I got kicked out of a hostel. Before that I got out of jail and I was actually homeless.

So I got put in some accommodation in a hostel, but it didn't really help me. I never really had anywhere stable so my drug use kind of escalated because I was hanging around with bad people.

Being in hostels, you're just surrounded by that, you're surrounded by drugs and drug users, so you just become a part of that lifestyle: where you get paid, all the people think you're best mates, they use all your money and then you're skint for the rest of the month. That just makes you go out and then you want to go out and steal because you've got no money, but then you're addicted to drugs, so you're going out stealing and you're just hanging around with bad people. You get yourself in bad situations really.

I was depressed, anxious all the time, paranoia because of drugs. It was just really bad, I was really down all the time. The only time I'd eat is when I was starving. So I wouldn't really eat much, I might eat once a day if that. I wasn't really bothered about food. I didn't really get any support, I was just in a bad place. My mental health was just deteriorating and I just couldn't really find a way out of it. So once I got kicked out of there, I was sleeping in a tent for about a week. I was sleeping rough, I was just doing anything I could to just get a bit of food, drugs, whatever.

Inspire were the people who actually got me into the hotel to begin with, because my inspire worker found out I was actually sleeping rough in a tent.

So she got me this offer, so I've come over. They've been coming over, meeting me, coming to appointments just to come to see me face to face. They speak to me on the phone, ring me up all the time to see how I'm doing.

Since coming here I've actually started reducing off my Methodone, so hopefully within two or three months I'll be off that and I'll be completely clean off drugs.They just helped me with everything I needed really.

Obviously I'm not good at stuff, so when I get a form for a tenancy,  I'm useless at stuff like that. So I've got that support around me, to help me with stuff like that: reading, writing and stuff. Anything I need, they are there for me.

The meals: breakfast, dinner, tea - they're always there. I've got the routine. If I ever feel down and need someone to talk to, the staff are always there.

Even on my birthday this year, they got everyone in the main room and we were all sat there and they came out with a cake for my birthday, singing happy birthday to me. They didn't need to do that but they went out of their way to actually just help people really. Well I've started eating for one. I've actually started putting weight on, I've put quite a bit of weight on since coming here. I feel like a different, well not a different person, but I feel like I'm on my way to be a different person definitely.

Everything in my life has just improved considerably since since moving here, everything. My drug use - I don't use drugs, my mental health has just improved a lot and just overall I feel like a better person really. I'm not sure what I want to do yet, but I want to get back into college. I'm thinking about either sports or fitness or maybe getting a trade behind me, doing a bit of building work or something.

I'd say to people in the hostels that there is support out there. I know it might not look like it and you're surrounded by a lot of bad people and a lot of bad things, but the support is there and if you really do want it, you can go and get it.

Where to go for support

If you or someone you know if homeless or at risk of homelessness, please contact your local council housing team: